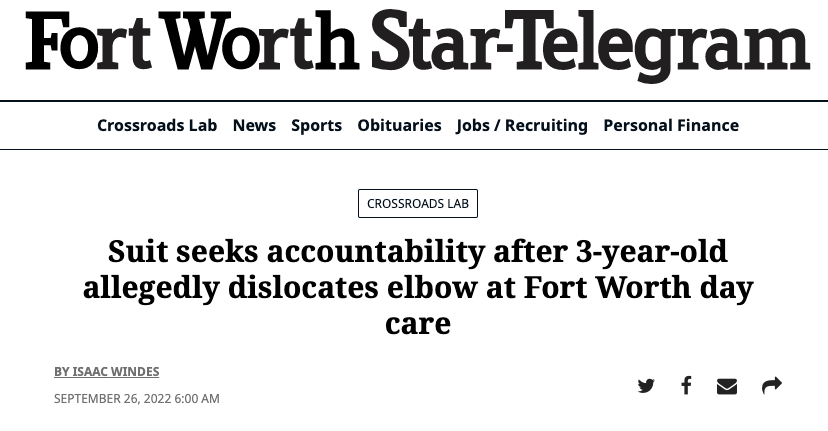 FORT WORTH - The Fort Worth Star-Telegram shared the story of Jaynisha Jackson, a Fort Worth mother who found that her child had been abused and injured while under the care of a local daycare called Compass Children’s Academy in June of 2021.

On the day of the incident, this mother came to pick up her daughter from daycare. When she arrived, she saw her child holding her arm in pain. Jackson called the authorities and immediately went to get medical attention for her child.

Upon investigating this incident further, by reviewing surveillance footage, it was discovered that a teacher at the daycare yanked the child by her arm with so much force that it caused her to spin around and fall on the floor. Then, the teacher pulled the child’s arm again and lifted her from the floor to make her sit against a wall “with force.”’

After this happened and the child clearly showed signs of pain, the daycare did not contact the child’s mother, emergency services, or the state to report an injury. Healthcare professionals determined that the incident led to the child’s elbow being dislocated.

Additionally, the State of Texas’ department that handles licensing and supervision for daycares, the Texas Health and Human Services Commission Child-Care Licensing Division, concluded in their investigative report that “reckless acts of Compass Children’s Academy caused physical injury resulting in substantial threat of harm to (the daughter)”

The Daycare’s History of Violations

It was discovered that in the past, this daycare was cited for a variety of violations, including lack of supervision of children, using unnecessarily harsh or cruel punishments towards a child, and failing to report child abuse or to use good judgment, competency, and self-control.

Other and more specific instances of putting children in danger included: improper storage of cleaning products, mistakenly releasing a child to the wrong parent, and not keeping count of how many children were in their care.

The daycare is currently under new leadership – it was taken over by new owners called Northstar Preschools in June of 2022; the former owners of the daycare were West Fort Worth Day Care LLC, who were the owners at the time of the incident.

This daycare was formerly a part certified as a part of the Texas quality and improvement system called Texas Rising Star, which incentivizes childcare centers to go above and beyond what’s required by law. The center shared on their website that they were still a part of this certification standard, but when checked with the Texas Workforce Commission, they were revealed to have never been a part of the system.

How The Button Law Firm is Helping This Family

The mother and her child are now being represented by The Button Law Firm in their case. In the lawsuit, Jackson and her attorneys are seeking a settlement for damages, including physical pain and suffering, mental anguish, medical expenses, and lost wages.

When discussing it with the Fort Worth Star-Telegram, Daycare Injury Attorney Russell Button discusses how often instances of daycare injuries happen. “It’s shocking,” Button says, “We get calls daily from families.”

Button says that state regulations do need to be updated to help improve the safety of childcare centers across the state, but in the meantime, daycares are still responsible for keeping the kids in their care safe. Button emphasizes that daycares and caregivers need to always act in the best interest of the children they’re watching and that they must go above and beyond to keep those children safe.

If your child was seriously injured at daycare, it’s important to take action and hold the daycare responsible. Be sure to reach out to our team at The Button Law Firm to get started today. You can contact us by calling (214) 699-4409 or emailing [email protected]. You can also reach out to us by starting a chat or filling out the form below.

If you want to learn more about the kinds of cases we have worked on in the past, be sure to check out our success stories page. There, we share how we’ve helped families across Dallas/Ft. Worth, Midland, Houston, and beyond with getting through the aftermath of a daycare injury.

More About The Button Law Firm

The Button Law Firm is a Texas-based law firm whose home office is in Dallas; our team is experienced in helping families and children after they’ve suffered serious injuries at daycare, across the State of Texas and beyond. With experience handling these types of cases, our team is well-equipped to help families move forward past this traumatic event that led to serious injury.

Our team at BLF is experienced and knowledgeable in matters of child abuse at daycare, child neglect at daycare, and other child injuries. To learn more about what action to take if your child is a victim of a daycare injury, click here.