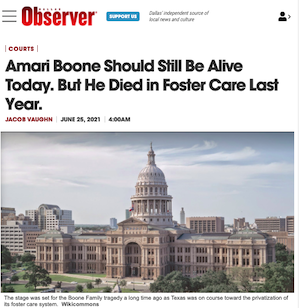 Dallas Observer reporter Jacob Vaughn chronicled the horrific events that led to the death of Amari Boone, a toddler who died while under the supervision of privatized Texas foster care company ACH Child and Family Services (or ACH) and it's community-based care division that goes by the name our community. our kids. The Button Law Firm represents Amari’s family in a lawsuit to hold the agency accountable for the three-year-old boy’s death, claiming ACH and its community-based care division failed to follow proper protocols and carry out their job requirements to keep Amari safe.

Dallas Observer writes: “Around 8:22 a.m. on April 10 last year, a black Toyota Corolla pulled into the ambulance bay at Cook Children’s Medical Center in Fort Worth. The driver hopped out and removed a small boy from the backseat. When he made it into the emergency room waiting area, the hospital staff could tell the boy was near death. They leaped into action.

“Less than two hours after his foster father brought him in, staff at Cook Children’s concluded Boone wouldn’t survive his injuries. He was pronounced dead at 1:19 a.m. on April 12 last year. His death certificate said it was a homicide resulting from blunt force trauma to the head.

“Boone had broken bones, bruises, and facial lacerations from his time in foster care. His court-appointed special advocate, his daycare director, real mother and father, and neighbors all made abuse and neglect reports. They spoke out for nearly two months but were disregarded and ignored at every level. Now, a lawsuit filed by Boone’s parents claims an investigation into his death found deadly practices by the ACH Child and Family Services contractor Our Community Our Kids and its employees.”

Russell Button, the founding partner of The Button Law Firm, was quoted in the article:

“This innocent little boy would still be alive if the organization had listened to multiple reports of abuse and followed protocols to conduct home visits,” Button said. “We want to prevent other children entrusted in the Texas foster care system from experiencing the horrific abuse, negligence and tragic fate of Amari.”

Many challenges with the existing Texas foster care system led to a move towards privatized foster care in the state. In fact, ACH publicly positioned itself as the premier Single Source Continuum Contractor (SSCC) and became the first SSCC to take over case management duties before Amari’s death. The organization has been paid more than $90 million by the state of Texas to serve as an exemplary, more efficient foster care system that would protect children from abuse.

The Dallas Observer article continues: “But just after 40 days in its [ACH’s] care, Boone had died.

“Since the beginning of Boone’s time with Our Community Our Kids, there were red flags, including spotty documentation of his case.

“The skeletal scan taken at Cooks and his autopsy confirmed Amari’s time living in that fictive kin placement had been filled with systematic physical abuse,” according to the lawsuit.

“On March 11, 2020, Boone’s court-appointed special advocate made a home visit. She reported what she saw to the Texas Abuse Hotline. They claimed the foster parents didn’t allow Amari to drink anything and one of them grabbed him roughly by the arm.”

The Button Law Firm will not take your case unless we believe we can help you. If we decide to work together, you can be sure your case will get the care and personal attention it deserves. Unlike many other attorneys, we don't make empty promises. We stand behind our commitment to you and your case.

The Button Law Firm is committed to open communication, so our clients have guidance, answers to their questions, and always feel connected to their team. You and your family come along with us in every step.

The Button Law Firm is driven by the passion for doing everything we can to help the individual get justice. Our team pours our hearts and souls into every client to help make a difference in their lives and make our community a safer place.

The Button Law Firm's goal is to make our client whole again by bringing them closure. We know your life has changed and that you are looking for help to keep moving forward with your life. The Button Law Firm will help you find closure so that justice is served.

With us, it's not business - it's personal. Our promise to you is that we will do more to keep you moving forward.