The Curious Case of the Russell Buttons

Founder of The Button Law Firm and our daycare injury and car and truck crash attorney Russell Button shares this incredible story of meeting ‘the other Russell Button’ and hearing his inspiring journey. 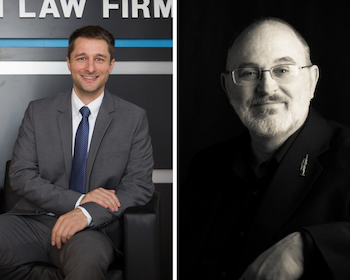 A few weeks ago, I got an email out of the blue from another Russell Button. At first, I was sure the message was spam. But the more I read, the more amazed I was.

This other Russell (I’ll call him “Russ”) was a real person reaching out to me because we had the same name. Russ is a musician and an industrial engineer-turned-interfaith chaplain. He’s a veteran of the U.S. Air Force and lives in a bungalow in Alameda, California. I couldn’t resist finding out more, so my team called Russ to learn his story.

It turns out Russ Button has been casually seeking out other Russell Buttons since the 1990s. It all started when his 18-piece band, Russ Button’s Swing Orchestra, played at a dance in Menlo Park, California.

“During a break, this guy came up to me and said, ‘Are you Russ Button?’ and I said, ‘Yeah,’ and he said, ‘I’m Russ Button!’” Russ recalls. “He pulled out his driver’s license and showed me his name was Russell Button! It was pretty funny, and we had a good laugh over it.”

That causal encounter inspired Russ to look for other Russell Buttons. He discovered a “distant cousin” in Michigan and ran into another in San Francisco. Then, through Google, he found me!

Russ can trace his genealogy back to Matthias Button, who traveled from England to Massachusetts in 1628. We might both be his descendants.

It’s a cool story, but what amazed me most is that Russ, like me, is on a journey to make a difference. He had a tough childhood, and healing from trauma inspired him to give back.

“When I was approaching retirement, I wondered, ‘What could I do to make a difference? I don’t need to work; I have money and the house paid for, so what can I do to make the world a better place?’ Working as a chaplain seemed like the thing,” Russ said.

Today, Russ ministers to the sick, the dying, and their families in local hospitals. He serves the spiritual needs of people of all faiths and backgrounds. When Russ isn’t working, he makes music with his band, Horns a Plenty, or spends time with his violinist wife, Katherine. You can listen to their music at Horns a Plenty and Temescal Quartet.

Like Russ Button, our Russell Button is on a mission to make a difference in the lives of his team, his clients, and his community. He chose to go into the law because he saw it’s where he could have the biggest impact on the lives of others who are hurt through no fault of their own. Every day, he’s motivated by this mission to go all-in for his clients, and his incredible work ethic has earned him respect and accolades as a top Dallas lawyer from his peers and other members of the legal community.