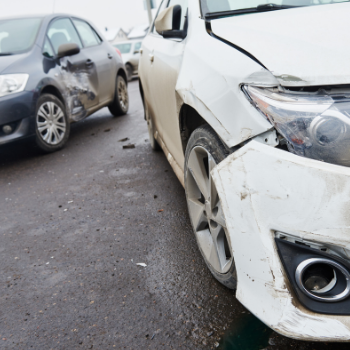 Before his car accident, our client — we’ll call him Josh — was a total fitness fanatic. He hit the gym seven days a week and loved playing basketball, wakeboarding, and keeping his body in great shape. Health was one of his top priorities in life. But in May 2020, his fitness progress screeched to a halt. Our Texas car accident attorney goes into detail here.

Josh was a passenger in another person’s car when it happened. While Josh’s ride was making a legal left-hand turn, another car appeared out of nowhere and slammed into it! The impact sent Josh’s vehicle spinning out of control and threw him violently against the door.

This crash never should have happened. The other driver was speeding, and she crossed a double yellow line and zoomed into a no-pass zone to try to get ahead of Josh’s vehicle. Her recklessness cost Josh everything.

When the fire department arrived at the scene, Josh was showing signs of a serious head injury, including a headache and blurred vision. He also had nausea, abdominal tenderness, neck pain, and back pain. Our Dallas personal injury lawyer knows that head injuries must be taken seriously.

The medical team rushed Josh to the hospital for treatment, and he was diagnosed with a closed head injury and neck sprain. The pain was so bad that he took morphine to dull it, and as we write this, he’s still in treatment for his injuries.

For a fitness enthusiast like Josh, this damage to his body was devastating. He had to miss weeks of work and significantly cut back on the gym routine and sports that he loves. That loss sent him into a depressive spiral.

When we took on Josh’s case, we knew that nothing we did would undo his trauma. But we could hold the other driver accountable and secure compensation for his medical bills, pain, and suffering — so that’s exactly what we did! We went after the reckless driver’s insurance company and secured the justice Josh needed. It was a huge victory that will help him move forward.

Far too often, we see clients like Josh dealing with ongoing pain and suffering after an auto wreck. Their lives are changed because of one person’s choice. They can’t do the workouts, sports, or other daily activities they usually do, sometimes for a short time, and sometimes for the rest of their lives.

In this case, it’s important to talk to an attorney who has experience handling car crashes. While we can’t change what happened, we can hold reckless drivers responsible.

If you or someone you know has been in a car wreck like Josh’s, our team of experienced, caring car wreck attorneys is here for you. You may be able to get your medical bills and other pain and suffering from the wreck paid for by the at-fault driver’s insurance company.