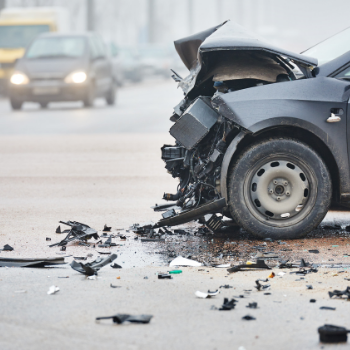 In June of 2019, the client of our Dallas car accident lawyer was driving his car through the area when he was hit by another vehicle that failed to stop at an intersection and yield the right of way before making a left-hand turn and slamming head-on into the driver’s side of our client’s vehicle, t-boning as he drove through the intersection. The other driver hit our client’s car with so much force that it caused him to spin and hit a third vehicle. Our client’s airbags were deployed, and his car was totaled. When police arrived at the scene of the crash, they escorted our client to the hospital where doctors discovered that he had a patellar tendon rupture as a result of the crash, which would require surgery. He spent a long time on crutches and in a knee splint and immobilization device.

What Ended Up Going Wrong?

The driver who hit our client failed to yield the right of way did not use reasonable care when attempting to make her unprotected left turn. Our client was driving safely and following the rules of the road but was unexpectedly hit and sustained severe injuries as a result.

What Was the Outcome of this Texas Car Crash?

As a result of this car wreck, our client needed a variety of necessary medical treatments and procedures including knee surgery to repair the injury he sustained from the crash. In addition to this, our client required months of physical therapy to help him heal through the injury. With this injury, he was left unable to work, as his job was one that required driving.

This crash took a mental toll on our client. After the knee operation, the pain caused him to struggle to get sleep. The surgery left a scar on his leg – a constant reminder of when he was hit and the pain he suffered in that wreck. He lost independence, unable to participate in the hobbies he previously enjoyed for years prior to the car wreck.

Our client reached out to us to take on his car wreck case. Not only did he have medical bills piling up, but he had to deal with the extreme stress in the aftermath of a car wreck. Our client had to spend a great deal of time out of work, losing income that he would’ve otherwise received to support himself. This sudden change can take a toll on someone’s day-to-day life, making even the simplest of things harder. Our team worked to ensure that he recovered all that he lost from this crash.

In the end, our client was able to find closure and get as close to his life before the wreck as possible. The scarring and permanent damage done to him will always be a reminder of the pain he endured, but the success of resolving this case has given him the tools to navigate this new life a little better.