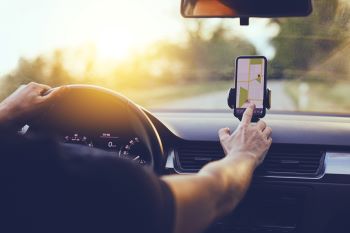 On October 23, 2016, a driver was using the GPS on his phone. As he was driving along a two-lane road in Flower Mound, Texas, his GPS told him to make a left. He was looking up and down trying to figure out where the turn is. The driver began making a left turn across on-coming traffic. Unfortunately, he turned right into the path of our client, Caroline. This was not a fender bender. It was a major crash.

Our client broke her femur and had to have it surgically repaired. She now has several screws and plates in her leg. Caroline spent weeks and weeks in the hospital and months in and out of treatment. She had deep bruising all over her chest. Her independence and mobility were taken away. Caroline is a teacher at a local high school. She not only had to miss the rest of her semester but did not know if she would ever be able to teach again. Her job was on the line.

Our Auto Accident Law Firm Was Front and Center

Starting with the lies that we dealt with up front. At the scene, the distracted driver tried to lie to my client and the police by saying that he was not on his phone. He tried to lie and say that our client was at fault for swerving into his lane. Needless to say, the insurance company was told it was our client’s fault and denied the claim.

We got the police report in showing that the officer placed all blame on the other driver. Nothing was mentioned about a phone. So, we sent him and his insurance company a letter demanding that we get his phone to inspect and a full copy of his phone call and text records. We firmly believed he was a distracted driver.

This pressure forced the insurance company to stop fighting liability.

Next, we moved on to the absolute devastation that was caused to Caroline. As she recovered, she needed ramps put up at her house to help with the mobility issues. We knew she would need the money for that. The broken femur caused her to have exponential medical expenses already and that number was climbing as the recovery time on her injury was potentially going to be years. Her knee was swollen. The surgery site, which was about a foot long, had to be drained, cleaned, and felt like it was tearing every time she moved because of the stitches it took to keep it back together. Now my client is left with a scar on top of her knee for the rest of her life, which as a woman, is significant.

The view that Caroline had of her knee throughout her stay in the hospital was not pleasant. She had to look at the damage caused to her day in, day out. She was constantly reminded of this pain that happened because the other driver chose to not pay attention and turn right into her oncoming vehicle.

The full policy limits were paid on this claim.

This was a substantial recovery for our client. All her medical expenses and liens were paid off. She was able to receive closure and a message was sent to the community that there is a system of accountability.

Why Was This An Important Case For All Drivers?

We all know that insurance companies are profit generators. They do not want to pay money that they know they must. However, we were able to force the insurance company to pay this claim in its entirety because we refused to allow our client to be taken advantage of.

Imagine that you were on summer break as a teacher. You were asked how much it would cost to have your femur broken and surgically repaired while you spend months in hospitals and doctors’ offices. All because another driver chose to be distracted and hit you head-on. To top it off, you will be called a liar. To us at The Button Law Firm, that is unacceptable. We protect our clients and we prevent abuse from insurance companies. This story illustrates why we do what we do.