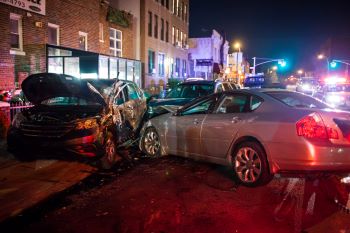 The Problem With Allstate Following This Texas Car Wreck

We are all familiar with Allstate Insurance. For over 30 years, Allstate has been marketing and selling uninsured/underinsured motorist coverage to the community. They created this elective insurance to sell us on the promise that we will be protected if any of our loved ones are seriously injured or killed in a wreck involving an uninsured driver or underinsured driver. Since the 1980s, Allstate collected the premiums from our client every month. Our clients paid this money because a deal is a deal.

On January 29, 2012, a drunk driver chose to get behind the wheel. He only had minimum insurance policy limits for Texas, which is $30,000. The drunk driver was coming up on a car wreck scene with a massive fire truck warning oncoming motorists of the lane closures up ahead. The drunk driver did not notice and slammed into the fire truck, which caused his vehicle to bounce off into our client’s car.  This was his 2nd DWI.

As a result of the wreck, our client suffered mentally and physically. The wreck was completely unexpected. Physically our client recovered for the most part in a year after undergoing intensive therapy. However, it really affected her mentally and emotionally as she was hit by a drunk driver. Her family testified about how our client’s life changed dramatically. Even after significant amounts of counseling and therapy, she was never the same daughter, wife, mother, and friend as she was before the wreck.

Our Car Accident Lawyer Came to the Aid of Our Client

The initial policy limits were paid immediately. I was brought in to take on Allstate, which was our client’s own insurance company because the driver was underinsured as compared to our client’s damages. Ultimately, the case proceeded to trial in Dallas County. I believe the family was brought closer together as a result of this trial. It all came together as the police officer, first responders, therapists, counselors, friends, and family all testified over a three-day jury trial.

The Result of Our Legal Team Being on the Case

In the end, six fantastic jurors related to our client and delivered a knock-out verdict in one of the toughest cases I’ve tried to date. The verdict was nearly double the insurance policy limits.

The verdict received national attention as there was a write up in a Plaintiff-only trial lawyer organization called Reptile. My co-counsel and I were monthly superstars for our verdict.