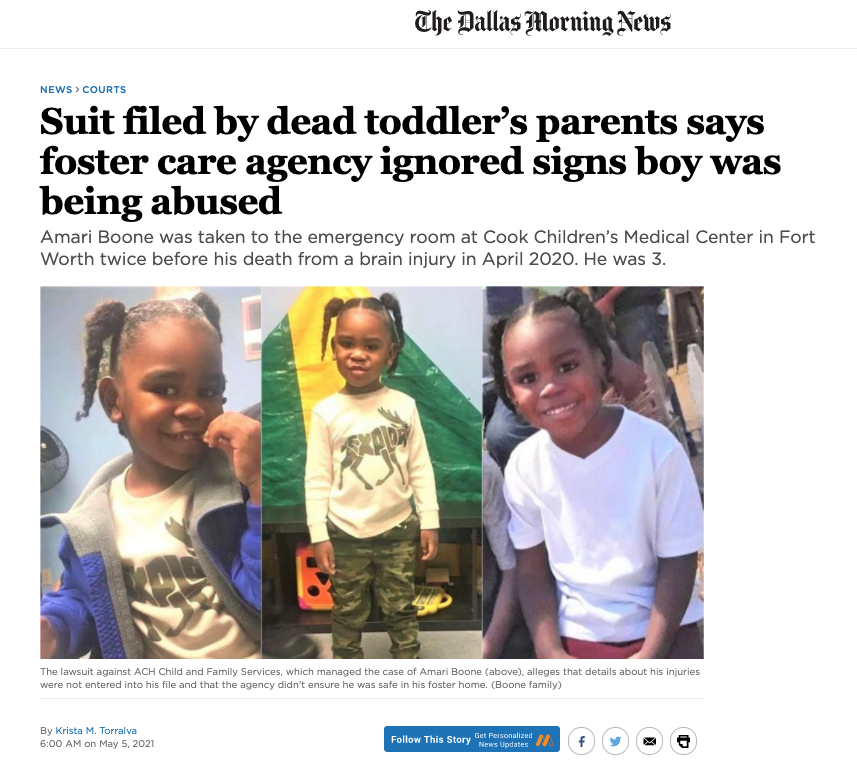 Krista Torralva at Dallas Morning News reported on the filing of a lawsuit in which The Button Law Firm represents the family of Amari Boone, a toddler who was killed while under the supervision of Texas foster care.

Writes Dallas Morning News: “The biological family of 3-year-old Amari Boone, a Fort Worth toddler who died in April 2020 while in foster care, is suing ACH Child and Family Services, the organization that managed his case.

“According to the suit, Amari had two emergency visits to Cook Children’s Medical Center in Fort Worth under ACH’s watch before his death from a brain injury. The lawsuit alleges that details about his injuries were never added to his case file and that ACH didn’t ensure Amari was safe in his foster home.

“Amari’s court-appointed special advocate reported “concerning behavior” on March 11, 2020, after a visit to Delancy and Foley’s home, according to the lawsuit. She called the Texas Abuse Hotline and Roberson and said she had seen one of the caretakers grab Amari’s arm roughly. She also said the men hadn’t allowed Amari to have anything to drink.

“Roberson was upset with the advocate for calling the Texas Abuse Hotline and did not document her call in Amari’s file, the lawsuit alleges.”