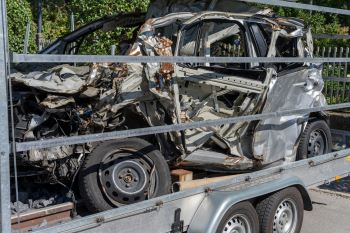 On January 23, 2015, this truck driver picked up a load in Louisiana for delivery between 6:00 am and 10:00 am in Houston. From where he was, he was set to arrive around 2:00 to 3:00 am. Without calling ahead to verify they would be open, he headed that way. When the truck driver arrived around 3:00 am, he could not get into the yard because it was locked. Instead of pulling his truck all the way into a driveway to get off the service road of the highway, he backed up along the service road to park his truck in the right-hand lane. He left the truck there without putting out the required hazard cones that would allow an oncoming vehicle to know this 18-wheeler was stopped and not moving. The truck driver chose to park on an active highway when there was a truck stop less than a quarter-mile up the road. Minutes after the truck driver went to go see if he could find someone to open the gate, a car with two teenage boys on their way home slammed into the back of the 18-wheeler. Both of them were killed.

Having an Experienced Texas Auto Accident Legal Team By Your Side

Shortly before we were brought into this auto accident case, the parties had gone to mediation where the Defense didn’t want to offer our client even a quarter of what she was asking for. I was brought into the case less than three months before trial. Our Dallas car accident attorney immediately began preparing the case for trial with our co-counsel, Johnny Garza. Our two firms were constantly working on developing cutting-edge demonstrative exhibits and timelines. We went out to the scene and took photos. We were tracking down and interviewing previously unidentified witnesses. Our trial team let the other side know that we were not just prepared to try this case, but that we were going to give them a war. Less than a month after we got involved, our trial team was able to get every penny of what our client had last demanded at the prior mediation. The Defense knew that we were ready to try the case.

One of the main cases we focus on at The Button Law Firm is truck wrecks. We don’t just handle them, we work them up and leave no stone unturned. At the end of the case, whether we try it or settle it, we strive for full value for our clients. They know that we are not just going to do enough to make some money and get out. We also make sure to impact community safety by demanding conduct be changed at that trucking company to save lives in the future.

As evidenced by this case and many others, I routinely get called about a catastrophic or wrongful death case months or weeks before trial. Lawyers know that when I get in a case, it will be an all-in effort by my team and theirs. This has led to many victories in the Courtroom, but also full value settlements for our clients.