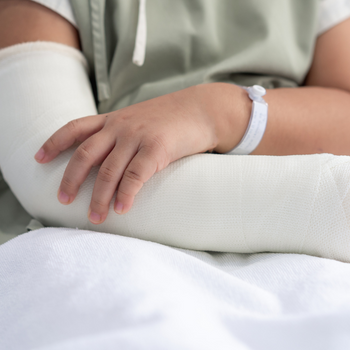 A Mother Taking Action After Her Child Was Injured

The Button Law Firm has filed a complaint on behalf of a Texas mother and her daughter against a Fort Worth daycare, Compass Children’s Academy, after surveillance footage from the incident revealed that the child was inappropriately disciplined when she was yanked by her arm from under a table with enough force to cause her to spin around and fall to the floor. The child was then yanked a second time to lift her from the floor and taken to sit against a wall with force. Footage shows the toddler crying and coveting her arm in pain. Following the incident, Compass Children’s Academy chose not to contact the child’s mother, emergency services, or the state of Texas to report the injuries and incident, even though the child was showing signs of extreme physical pain. The toddler was left in pain for the remainder of the day, until her mother arrived to pick her up. Later that same day, medical doctors discovered that the child’s arm was dislocated as a result of the caregiver yanking her arm.

Law enforcement was called to the scene by the mother, but the Compass Children’s Academy daycare Director told the employee involved to go home in advance of the police arriving at the daycare. Afterwards, it was discovered that the caregiver was not fired and returned to work the next week with no consequences or additional training.

During  investigations by our team, it was discovered that Compass Children’s Academy had been cited multiple times by the Texas Health and Human Services Commission, from January 2016 through June 2021, for a variety of deficiencies, including:

Because of this list of citations the daycare has received, the state of Texas put a “Plan of Action” in place at Compass Children’s Academy to evaluate, monitor, and supervise its ability to meet the state’s minimum standards for childcare in Texas. This plan included things like parent surveys, frequent staff observations and evaluations, and hiring tenured program coordinators as mentors. Sadly, the Plan of Action was lifted on the same date that this incident happened – the same day that the toddler was subjected to inappropriate discipline, causing her physical pain, physical injuries, and other damages.

As a result of the daycare’s negligence, the damages the child and her family suffered included:

You can read the filed complaint here.

What the daycare did caused unnecessary strain and irreversible trauma on the child and her family. Daycares who ignore safety procedures, fail to train and supervise its employees, violate rules and laws on prohibited forms of punishment, and do not provide the minimum standard of care under Texas law, must be held accountable.

How Does Abuse Like This Happen in Texas Daycares?

In our experience as Texas Daycare Abuse Attorneys, many of these kinds of incidents happen because of the failure to properly train caregivers, improper supervision by directors, and a lack of background checks of staff members.

When combined, these failures are really dangerous for the young kids in the care of these facilities.

That’s why it’s so important that daycares that have unqualified, untrained, and unsupervised employees are held accountable.

The Button Law Firm has experience filing claims against daycares who abuse or neglect the children in their care. Unfortunately, these incidents continue to happen because daycare directors and management often don’t want to take the right steps to properly hire and train their staff.

Parents shouldn’t have to worry that their child is going to sustain a serious injury while in daycare. If you or a loved one has a child who has been seriously abused or injured in a Texas daycare, be sure to contact our Daycare Injury Legal Team. We are knowledgeable and experienced in handling these cases against daycares to help your child and your family keep moving forward in life.