Seven Songs for Your Summer Playlist 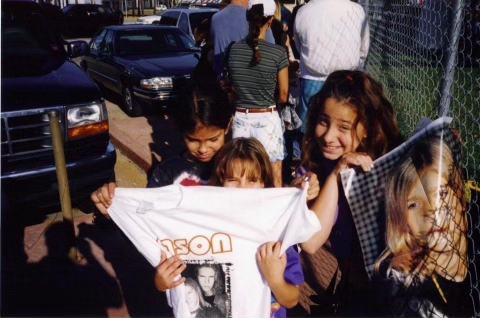 If I had to pick one genre of music to listen to for the rest of my life, it would be country. I grew up singing along to Willie Nelson, Randy Travis, and George Strait on the old tape deck in my dad’s truck. Then, I taught myself guitar. The first two songs I learned were “Simple Man” by Lynyrd Skynyrd and “Folsom Prison Blues” by Johnny Cash. “Folsom Prison Blues” is still my favorite song. Everything about it — the words, the rhythm, the melody — is simple, yet it’s a timeless piece of music that never gets old and will always be played. The story is so vivid that you can see it in your mind as you listen to the song. Who needs musical frills when you have that power? In honor of World Music Day, and in honor of Johnny Cash, I asked my team to share their favorite music songs with you. Feel free to steal them for your summer playlist!

‘Wherever You Are (Donde Quiera Que Estés)’ by Selena

Rosie’s favorite artist is the late Mexican superstar, Selena Quintanilla. “Her entire aura was mesmerizing. She was charismatic, humble, talented, and kind, and her laughter was contagious,” she says, adding that she still remembers hearing about Selena’s death in third grade. “As a Mexican American, role models were scarce for young girls like me at that time and that is why her death was such a huge blow.”

Jacky also shouted out Selena and called “La Carcacha” “one of the best cumbias to exist.” All of her favorite music is in Spanish. “When I was about 6 years old, I vividly remember the long trips to Mexico me and my mom would take in her little red Chevy Cavalier. She had a glove box full of cassettes of different artists like Juan Gabriel, Miguel y Miguel, Alicia Villarreal, Ana Gabriel, and Joan Sebastian. All Mexican legends,” she says.

Jacqueline grew up with a different soundtrack: Her parents’ favorites like The Beatles, ABBA, Jimi Hendrix, Barbra Streisand, and Queen. When she started picking her own music, Kelly Clarkson and Fall Out Boy made the list. But her favorite song is John Denver’s country anthem. “Every time I’m on a road trip, I have to listen to it,” she says.

Jessica’s love of concerts started with a childhood trip to see New Kids on the Block. She remembers wearing a band T-shirt and singing along! Since then, she’s seen dozens more shows. “I grew up in a household that preferred playing music over watching TV. We tend to do the same at our house with our girls, who know how to have a good dance party!” she says.

“Gangsta’s Paradise” is Ashley’s go-to karaoke song, but she’s also a self-proclaimed “Swiftie.” “[Taylor Swift] is someone I can relate to as I navigate life, love, relationships, self-reflection, and life’s passions,” she says. “I have deep respect and admiration for her courage to re-invent herself while remaining true to who she is as a person.”

Cristina’s first-ever concert was a local radio station bash, and for her, Hanson was the highlight. “Ashley and I stood in line for what felt like hours in a sea of people. We made concert signs of the Hanson symbol and wore Hanson T-shirts. I couldn’t tell you a single other artist in the lineup that night because all that mattered was hearing ‘MMMBop’ in person,” she says.

At The Button Law Firm, we have a passion for helping people. It drives our team to work hard for the families and children we represent every day. It also means that we will not take on your case unless we believe we can help. If we take on your case, you can be sure that it will get the care and personal attention it deserves. Our team is committed to three core pillars – passion, communication, and justice.

We are driven by a passion to for doing everything we can to help the person affected get justice. Our team pours our hearts and souls into every client to help make a difference in their lives and make our community a safer place.

We are committed to open communication, so our clients have guidance, answers to their questions, and always feel connected to their team.

And finally, the pursuit of justice drives our goal to make our client whole again by bringing them closure. We know your life has changed and that you are looking for help to keep moving forward. The Button Law Firm will help you find closure so that justice is served.

We are devoted to helping people every step of the way, and that starts with offering free resources and information on daycare injuries, daycare abuse, catastrophic injuries, wrongful death, and our other practice areas.

Our team has offices in Dallas and Midland, and we handle cases in Houston and all over the State of Texas. We’re also ready to take on cases selectively across the country. If you have questions, contact us today. You can call us at 214-699-4409 or reach us at [email protected]. We’re doing more to keep you moving forward.