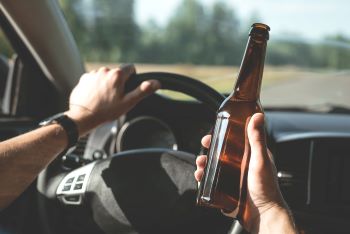 On April 6, 2015, a drunk driver got behind the wheel with his wife and 2 small kids in the car. They were visiting a drive-in movie theater, and sadly, the drunk driver did not stop drinking did not stop there. The drunk driver continued to drink along the drive back home. He was over twice the legal limit at the time of the wreck.

As the drunk driver continued along the roadway, he began to veer left on a busy road in Dallas County, Road FM 1382 in Cedar Hill, Texas. The drunk driver crossed over the median, through the grass and the dip, and went into oncoming traffic. He did nothing to avoid the car heading toward them and caused a major head-on crash to occur in a matter of seconds.

Driving the opposite way on FM 1382, our client, Collin was on his way to his office to get his new schedule for. He had planned to head home right after.

After the wreck had immediately occurred, the drunk driver was stumbling around and had beer cans falling out of the car. The police were called, and from that point on, our client's life was changed forever.

How Our Auto Accident Attorneys Led Our Client to Recovery

Collin got ahold of our office through his employer. With our vast network of medical professionals, we were able to help Collin get into a chiropractor's office quickly. That chiropractor helped our client get back to a tolerable pain level over a series of months. Throughout that time, Collin went in to get imaging and found out the ligaments around his spine were permanently stretched and would never be the same. So, he took it upon himself to work as hard as he could at recovering physically so he could get back to work.

The defense also tried to argue about gaps in treatment, which is an argument many insurance companies use to try and show clients who have been injured didn't get consistent treatment. The reality of it is that like many people in this situation, Collin had to put food on the table and could not continue to receive more medical bills. He was about to use his only day off work each week to go and spend the whole day getting medical treatment. Otherwise, he had to tolerate the pain at work and do his best, which is exactly what he did.  In Collin's deposition, he was able to show the true human aspect of this scenario in order to defeat the defense.

With the work our team put into this case, we were able to show the defense that we outwork other firms and were ready for anything. The defense knew that they would be facing a difficult road ahead of them.

When the defendants chose not to show up for their depositions, we immediately knew that we had them right where we wanted them. Through Collin's story, we were able to clearly portray how much these wrecks can affect a person's day-to-day life.

The Full Policy Limits Were Paid On This Claim

This was a substantial recovery for our client. All his medical expenses and liens were paid off. He was able to receive closure, and we sent a message to the community that there is a system of accountability for drunk drivers.

In the end, the greatest recovery our client received was closure so he could move forward in life. Collin was a fantastic client and has remained a close friend of the firm.

Why Was This An Important Case For All Drivers?

In the end, insurance companies are profit generators. They don't want to pay the money that they know they should. However, we were able to make the insurance company pay this claim in its entirety because we refused to allow our client to be taken advantage of.

Imagine that you were on your way home from work at night and someone decides to drink while driving and hit you head-on. You were asked how much it would cost to have your spine changed forever while you spend months in and out of treatment. To top it off, the drunk driver and his wife don’t care enough to show up to their depositions. To us at The Button Law Firm, that is unacceptable. We protect our clients, and we put a stop to abuse from insurance companies. This story illustrates exactly why we help DUI car wreck victims across the state of Texas.

Download our guide below or contact us to have a member of our team send you your free copy.