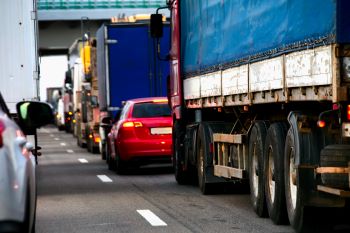 Truck Accident in the Midst of Stopped Traffic in Texas

On May 8, 2017 at approximately 6:10pm, a construction company truck slammed into the back of stopped traffic. The company’s driver was unlicensed and not paying attention. Our client, Sandra A. was the injured driver of that last vehicle stopped. It resulted in Sandra requiring months and months of physical therapy, injections, MRI’s, surgery recommendations, and lost work. We knew we had to help her as soon as she called our office. Read below to see how we were able to help get Sandra’s case resolved quickly and efficiently for policy limits.

Our Auto Accident Attorneys Came to the Legal Rescue

As soon as Sandra called us, we were able to start our investigation into the wreck. We found out that the driver was unlicensed and the owner knew it. The driver was in a hurry and not paying attention that day as he slammed into the back of stopped traffic. Sandra was sitting there looking in her rear-view mirror watching this happen as there was nothing she could do.

The defense tried to say that our client’s injuries were not caused by the wreck but were instead pre-existing conditions. We took that away as we met with the client and got to know her story. There was not a day in her life she wasn’t active before this wreck.

Next, the defense tried to say the rear-end collision could not have caused because all cars drove away, which is an insurance company myth. They know the damage on the outside does not have any correlation to the damage to the occupants inside. This one has a high-speed impact by the truck on a car. It had major damage and was a big impact. They knew that The Button Law Firm has handled and done very well on cases where the property damage doesn’t look like someone could be hurt inside. The insurance company let go of this defense as soon as we got into the case.

Finally, the insurance company tried to complain about her initial gap in treatment of three months. However, once we got into the case, we realized that the insurance company told her not to go to the doctor just yet. They kept delaying and delaying Sandra. Finally, Sandra realized this was an insurance tactic and knew it was time to go to the doctor. So, we were able to create a timeline of events throughout that entire supposed gap in treatment that showed how bad her injuries were during that time and nothing other than the car wreck caused them.

At this point, we were ready to make a demand and use our innovative approaches to handling major cases to get this one resolved for a hard-working mother that needed to move on.

This case ended up being one where we had to use innovative strategies to get it resolved for the policy limits. Time was against us with our client needing serious medical treatment, including surgery on her lower back. We knew there wouldn’t be enough insurance to cover everything if we waited to act.

We sent a powerful demand that we are known for at The Button Law Firm that immediately caught the adjuster’s attention. When they continued to come up on their offers, we continued to demand policy limits. Finally, we gave them an ultimatum that it must be paid or we would file the case in court. They missed the deadline, and as a result of that, we filed the lawsuit when they thought we were bluffing – we weren’t – and the adjuster’s supervisor called to tell us they wanted us to dismiss the lawsuit because their insureds were not cooperating.

We knew that was a lie since we had just served them with the lawsuit and they told our process server they wanted this case done. We got that in writing and told the insurance company we were not doing anything but demanding their policy limits.

Within 30 seconds, the senior adjuster got on the phone and tendered the policy limits on this case, and full policy limits were payed on this truck wreck claim.

Our client was relieved that she called us because we were able to get this case resolved quickly and efficiently. We were able to reduce and pay off all her medical bills from the settlement money – you can read more about what subrogation and medical bill requirements there are in our article: Dallas Car Wreck Attorney Explains Subrogation and Liens.

Why Was This an Important Case for All Drivers?

In this case, the driver was distracted and in a hurry. Their inability to follow safety rules put other drivers at risk and ended up hurting our client.

She had been misled by the at-fault insurance company for months until she realized she needed a law firm like ours. Had she not called us, it would've likely taken her years to get a resolution for this case. Instead, she is now moving forward with her life and has closure after this devastating car wreck.

One thing that Sandra learned is to call an experienced car wreck trial law firm like The Button Law Firm when you have a serious injury as a result of a car wreck that was not your fault. A serious injury is anything that lasts longer than a couple of weeks, has medical bills over $5,000 or has long term damage like broken bones, surgeries, brain damage, or loss of limbs.

Sandra did not have PIP or UM/UIM coverage. So, she was forced to only be able to recover the amount of the at-fault driver’s insurance, which wasn’t enough at the end of the day.

Finally, Sandra learned that insurance companies are not your friend. They may seem nice, but the adjuster’s number one responsibility is to save money and drag their feet.